My job is seldom boring and just this past week I had an interesting request come in asking,

My initial response was that there is no reason I can think of why that won’t be possible, but as I hadn’t read anything either I figured I’d spin up a lab, get it working and report back.

First step is to create a namespace and link it to underlying storage.  This can be created through kubectl or through workload management within virtual centre.

In the image above you’ll see that I’ve already created the persistent volume claim for that namespace, which is the next step.  I’ve included sample yaml below for creating the PVC.

This can be applied by running;

Once created the status of the PVC can be checked either through VC or kubectl.

Next we can look at our deployment manifest itself.  Within the deployment yaml,

Progress can be tracked with standard kubectl commands;

Well the goal was to deploy a functional MS SQL Linux container.  To connect I fired up Azure Data Studio, directed it at the deployment load balancer on port 1433 and created a database. 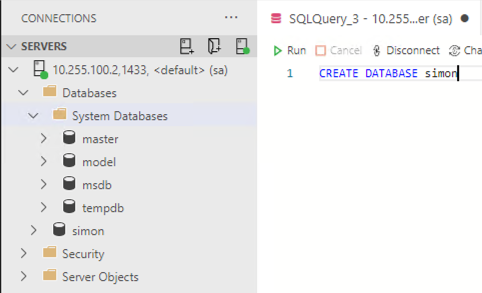 Following standard kubernetes steps, I’ve deployed Microsoft SQL on Linux inside a VMware Tanzu Kubernetes container.  Feel free to use the manifests above to explore this functionality in your own environments.  This is however just demonstrating that this can be done, I would suggest that there are more considerations that need to be made to make this solution fit in with maintenance plans and be production ready.

p.s. thanks to Dean for proof reading my YAML!