Ravello responded! I have been granted a user account to create my home-lab build on the Ravello cloud service.  What makes this so very cool for me, is that I know I’m going to be travelling a lot over the coming weeks and months. So I can effortlessly take my lab with me.  I’ve also been working in an architecture role recently and have been itching to get back hands on with some of the technology. The home-lab build is the perfect place to scratch that itch.

I’m going to use the lab primarily to get reacquainted with VMware’s VSphere stack. Run through some of the installations and configurations. Before expanding on to configuring and playing with VSAN, vRealize, NSX and some cloud connectors, such as Velostrata.  I also want to use this as an opportunity to build out some sample client environments to access new products, test builds and build scripts etc.

My current ultra simplistic design for the cloud home-lab build has already been broken. I had planned to create two ESXi hosts and add an appliance running the platform Services controller and Virtual center applications.  I had incorrectly assumed that VMware also provide VC 6 as an OVF, just like previous versions.  As I hadn’t planned on running any Windows in this environment to begin with, I was reluctant to build out a windows server to run the PSC and VC…  Instead I devised a plan to complicate the environment by building an additional ESXi host and nesting a VC appliance within that.

This is the beauty of the home-lab. When it doesn’t go to plan you can play around and try out techniques and configurations you wouldn’t normally consider, have the time to undertake in the field or if you had purchased a few thousand pounds worth of hardware.

The new plan looks  like this from a Ravello perspective. 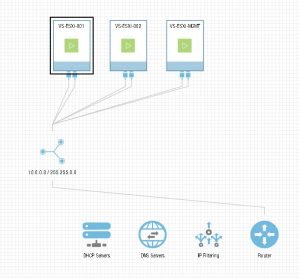 This is the network diagram that governs the environment I’m building within Ravello.  minus a few key details.  The environment above is made up from three ESXi 6 hosts each with 4 CPUs, 16 GB RAM, 2 NICs and 350 GB storage split across 2 volumes.

One host will be dedicated to running the VC appliance. the other two will be a cluster for me to experiment and build familiarity.

The install process has already been a lot of fun, with a few gotchas that I’ll expand upon a bit later.