This week I had a customer with some errors trying to use the following componenets together: PowerShell, CloudConfig, and cloudbase-init within a Cloud Assembly blueprint.  To put it bluntly, the code was not running correctly.  The customer could run the code locally without any issue.  However, as soon as the same PowerShell was included within a CloudConfig element it did not work and they could not understand why.

I don’t often get to be hands on and troubleshoot these things nowadays, so with thanks to my collegues Chris and Dean, I was able to get access to the environment components I needed to test and troubleshoot.

The two code elements that the customer team had difficulty with were:

There is nothing particularly complicated in either of the scripts, although it is worth noting that the two elemements that are consistantly erroring in the code are being processed via a command pipeline.

The code that was created contained multiple elements, and therefore followed the cloudbase-init multi-part content formatting, details for this can be found here.  The code below is taking the locally working code and transposing that into CloudConfig elements for inclusion in the cloud assembly blueprint.

N.B.  it is worth pausing here for a second and noting that the code uses the properties of the deployed disk resource to pass drive letters, labels and disk numbers. Properties under a resource appear to be treated as an array, and therefore require the square brackets. for example ${resource.Cloud_vSphere_Disk_1.unitNumber} will pull the value back but enclose it within square brackets, which will break the PowerShell element. Whereas ${resource.Cloud_vSphere_Disk_1[0].unitNumber}, will correctly pass the variable.  Thanks to my collegues Dean (who provided advice whilst travelling on the train no less) and Katherine for helping me work this out.

It might be a spoiler to say, but this syntax won’t work, so please don’t copy it.

It might be a spoiler to say, but this syntax won’t work, so please don’t copy it.

Outside of the deployment we can inspect the CloudConfig code, this allows confirmation that the assigned variable values within the blueprint are being passed to the CloudConfig element.

This allows confirmation that the code looks as if it should indeed run within the host. The next step is to look for errors within the the cloudbase-init.log file within the deployed object (the location is set at the time that cloudbase-init is installed and by default will be “C:\Program Files\Cloudbase Solutions\Cloudbase-init\log”.  Searching the logs for the commands that have not successfully implemented is a shortcut for finding the part of the log that contains any error messages.

Searching for the New-Partition cmdlet provides an error that is worth exploring further. The error is stating that the command will not take an input via a command pipeline.  Thefore the most suitable next step is to break down the command pipeline and run the cmdlets individually within the script.

The above takes the four elements of the initial script (initialise, partition, format and label) and runs them individually, calling the variables directly rather than via a command pipeline.

The logs are not easy to digest in a screenshot, so instead here is the successful output from this element of the script, now that the command pipeline method has been removed.

Place this element appropriately in the CloudConfig to make the Active Directory PowerShell modules available to cloudbase-init on the deployment object.

The above screen capture highlights the output from a get-module command after the RSAT-AD-PowerShell module is installed.

To build the working element, the command pipelines have been removed and the target for the Set-ADComputer cmdlet has been defined by passing the variable ${input.hostname} to the -identity switch.  The values being passed into the CloudConfig AD PowerShell element can be seen below.

Values being passed to CloudConfig for the AD PowerShell element

The CloudConfig AD PowerShell element running successfully means that these values are passed onto the required componenets as expected, as can be seen below. 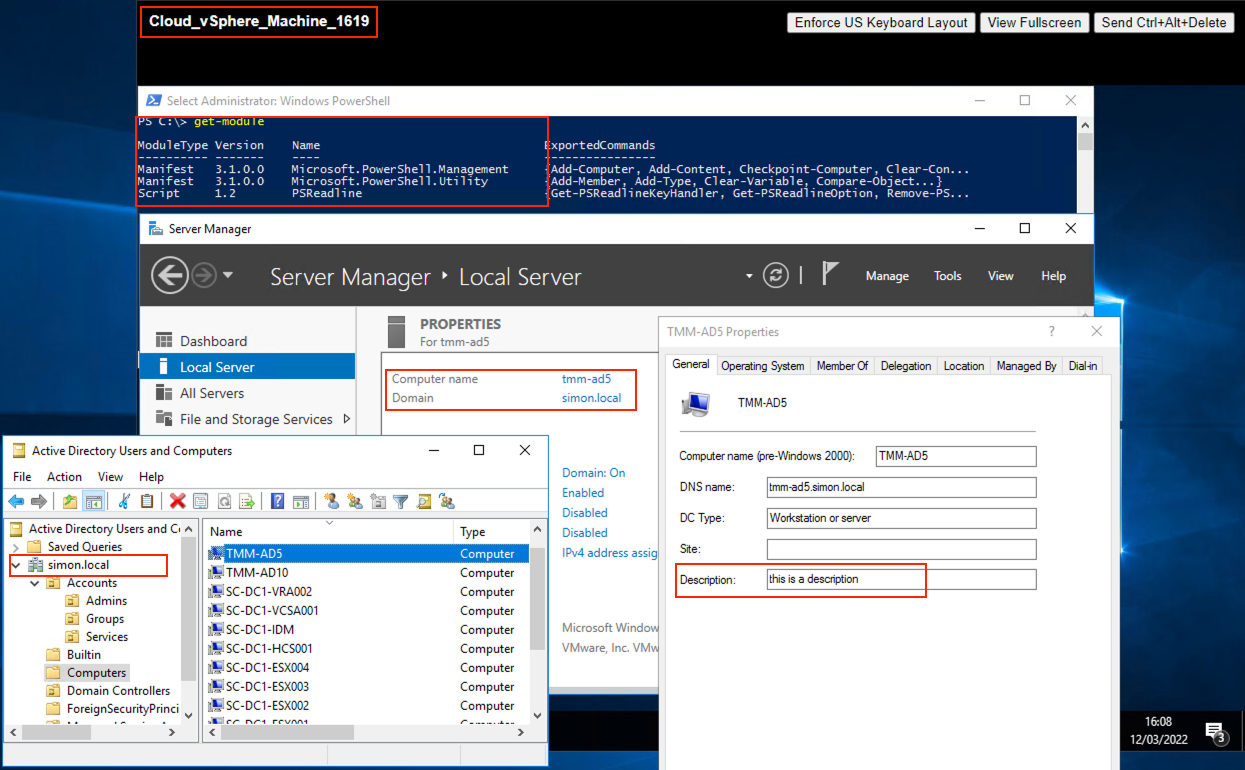 This is a busy image so I’ve highlighted the pertintent elements. The server “tmm-ad5” has joined domain “simon.local” and had the computer object description updated to the text passed in the CloudConfig.  In addition the uninstall for the RSAT-AD-PowerShell module has been completed as evidenced by the fact it is no longer listed in the output from get-module.

When working with CloudConfig, cloudbase-init and PowerShell the following seems to be resonable advice:

Special thanks to my collegue Chris who spent part of his Friday afternoon helping me piece all of this together.

Hopefully this is useful to someone else.