I recently read an excellent post by Bill Hunt titled Cloudbusting.  In this article Bill outlines and challenges some of the myths of cloud computing as he sees it from his federal role.  Bill is a contributor to the 2019 Federal Cloud Computing Strategy, “Cloud Smart”, which introduced a subtle change to strategy in this sector by advocating not for a ‘cloud first’ (which is often translated as cloud only) but adopting a cloud smart approach, which in its own words:

“To be Cloud Smart, agencies must consider how to use their current resources to maximize value: reskilling and retraining staff, enhancing security postures, and using best practices and shared knowledge in acquisitions. Cloud Smart is about equipping agencies with the tools and knowledge they need to make these decisions for themselves, rather than a one-size-fits-all approach.”

So what are the five myths that are called out.

I’m not going to dive into all of it, but reading the article a few things stood out to me, and I realised there are parallels to the operating environments that are described in the US and those that exist in the UK.  Specifically when we are talking about Myth 1: Cloud is cheaper.

“Unfortunately, it is based on false premises and poor cost analyses. In practice, the government almost never saves actual money moving to the cloud – though the capabilities they gain from that investment will usually result in a greater value”

I read this and was stopped in my tracks.  I had not up to this point seen this point recognised and articulated so brilliantly.  The benefits of cloud need to be expressed in terms of the value created and not in terms of any realised or potential cost savings. I would suggest that any exercise extends to identifying the opportunities being targeted by moving services to the cloud, if the move is replicating what is already in place, why move?

“…it’s important to note that most Federal agencies own outright the facilities their data centers are located in. In the 1980s and 1990s, agencies began repurposing existing office space for use as data centers, adding in advanced cooling and electrical systems to support their growing compute needs. This changes the equation for the total cost of ownership because the facilities are already built and can be run relatively cheaply…“

This is a landscape that seems very familiar to what I’ve seem multiple times when working with the public sector over the past 20 years.  Many public sector bodies I’ve engaged with have data centers,  these are well managed and follow the right security controls.  There is also the joint centralised investments such as Crown Hosting built in partnership with the Cabinet Office, 2 years ago there was even further talk of expanding data center investment.  Many public bodies I’ve worked with have agreements and contracts with facilities like crown hosting that run for decades.

All of which really emphasises that if value is not being created, or if moving is not opening up targeted opportunities then why move?

So where is value being created or what opportunities are any rising costs being offset against?  Below is a quick map of a public sector body, for the purposes of the map its delivering three core needs for members of the public, 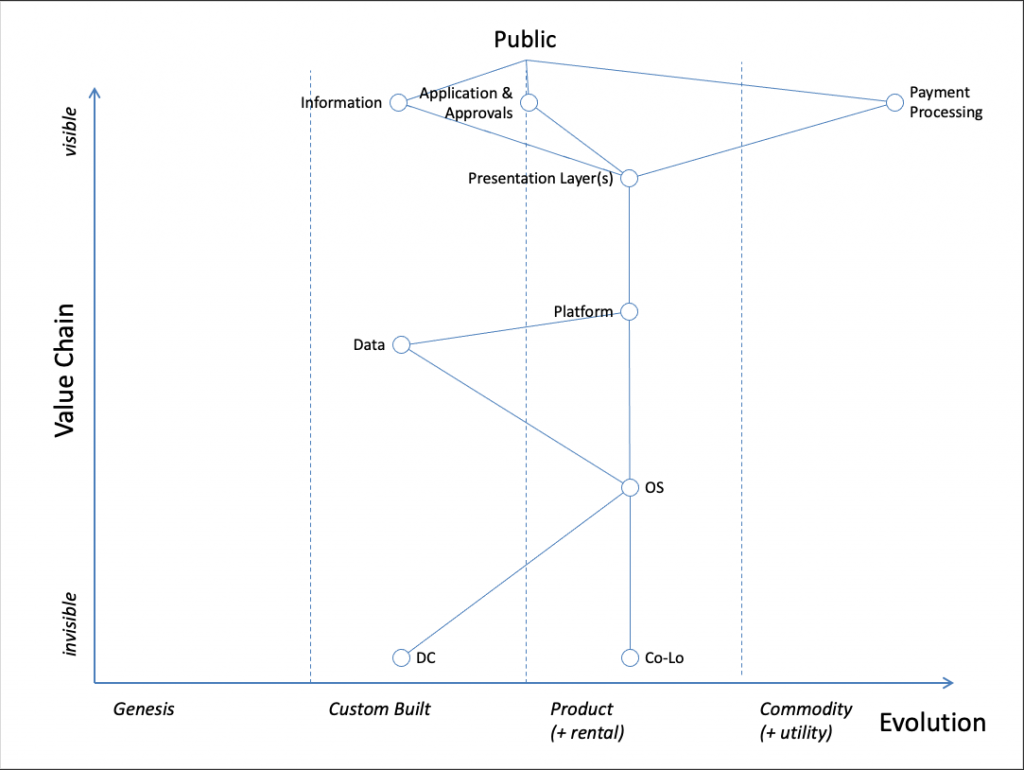 Quickly mapped here to support these services we need a Presentation layer, a Platform, Data, Operating Systems and Hosting either self operated or co-located at crown hosting perhaps. 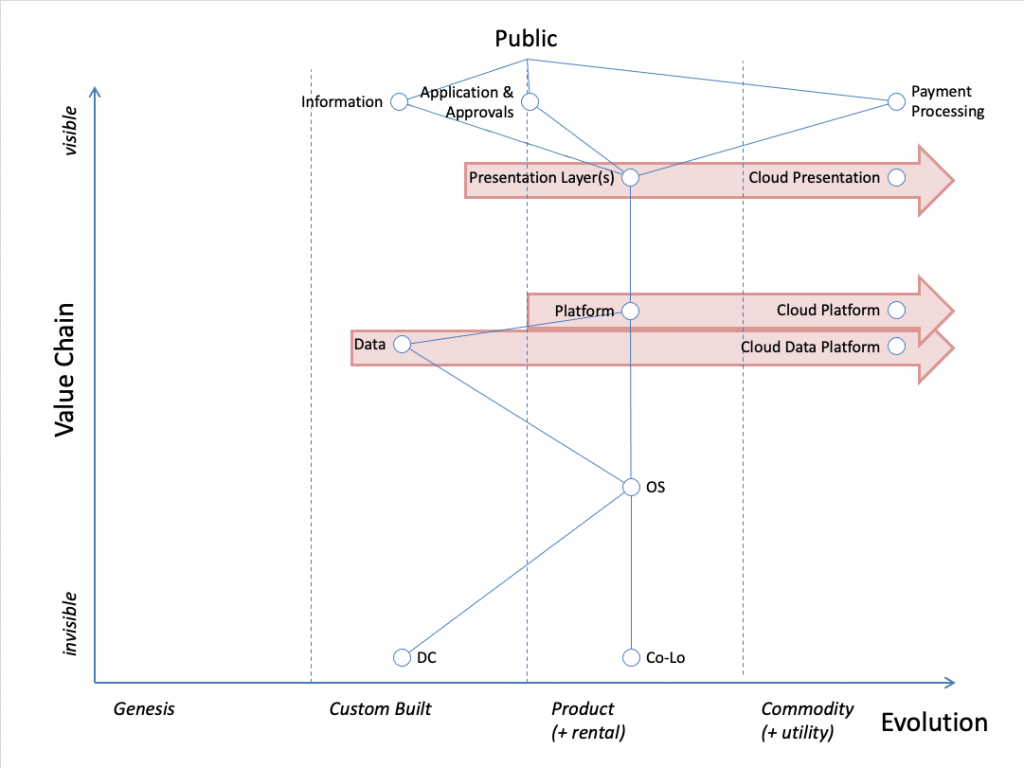 The Presentation Layer, Platform and Data services being provided are obvious targets for evolution and a move to utility cloud based services. 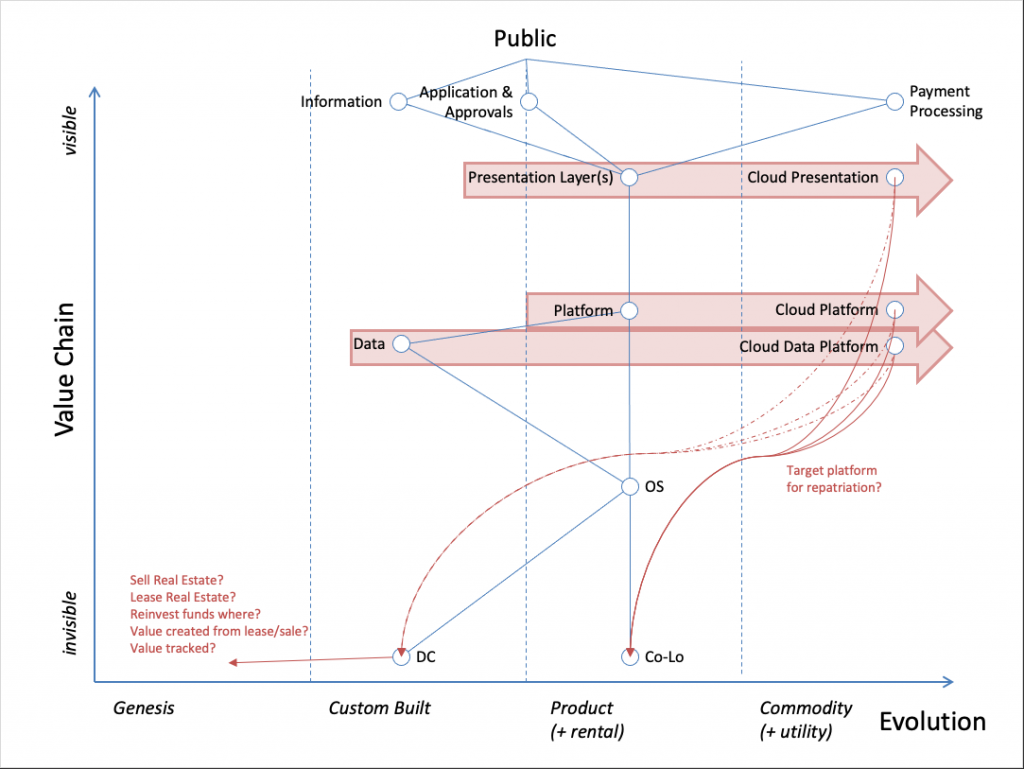 What happens to the DC and Co-Lo? Presumably there are some pretty interesting decisions to be made, does the organisation…

Without a clear articulation of the value being generated from a cloud move, could it be argued that the public ends up paying for duplicate capabilities?  If these assets are sold how are public sector bodies tracking and reporting on the value being created?  How are public sector bodies investing these cash injections or regular income? Or is the focus simply on survival and topping up budget deficits and managing gaps caused by austerity?

The world changes constantly and technology changes with it. Global events and new innovations drive changes in behaviour.  In twenty short years breakthroughs in speed, throughput and latency of networks now mean we live in an always on digital world of video calling and social media, only visionaries would have predicted such an environment 50 years ago….

The point I’m making (badly) is that nobody can with any real level of assuredness predict what technology will look like in five, ten or twenty years and what capabilities will be required.  We can take an informed guess and for example say that networks are likely to span globes, to be software defined and carried by satellites rather than copper wires.

We can take another guess and say that the future of utility computing is located with global hyper-scale clouds, but what if they are not? Have all future workloads now been made homeless outside of a hyper-scale cloud, has the family silver been sold?

Who knows what the future holds, as Arthur C Clarke’s third law states “Any sufficiently advanced technology is indistinguishable from magic”.  Similarly we live in a largely predictable and forecasted world, where these forecasts hold up right to the point where they don’t and we have to manage ‘Black Swan‘ events…