The cloud lab is progressing well.  It is taking longer than I would like.  However, it is providing me with valuable hands on time.

I had to rework the design of the lab, this wasn’t down to technical limitations, it was down to performance.  With the limitations in place on the Ravello hosts (4 CPU and 16 GB RAM) it just not was fast enough to run a vSphere embedded VCSA.

As there is such a big dependency on DNS for any installation of VC. This reworking of the model required that I also provide a DNS server, which might as well double up as an AD controller, DHCP server and my own jump off box into the environment.

Added to these cloud services, I have deployed three ESXi hosts to form the foundation for my lab cluster.

From a networking perspective I’ve kept this as simple as possible.  The entire lab exists on a /16 subnet.  This is so to maximise the hands on time I get with more complex vSphere configurations rather than more complex Ravello configurations. 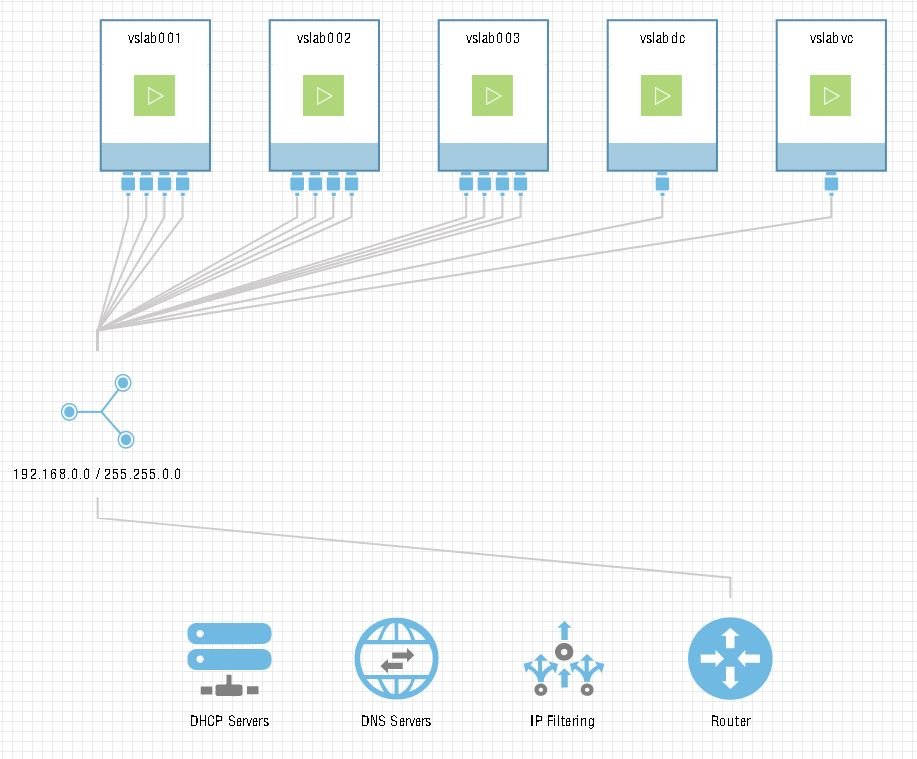 The environment consists of the required networking services, AD, DNS, DHCP etc.  The VC server is running upon a windows host.  Installed and configured with an embedded Platform Services Controller and PostGres DB.

Each of the ESXi hosts has been added to this VC and configured into a cluster.

This cluster hosts a VSAN that provides the storage layer to the Virtual Machines.  I had hoped to be able to present the free space from the boot volume to the VSAN. I haven’t seen an obvious way to achieve that just yet, and it wasn’t important in the context of the lab.

Distributed switching has been configured with VMK and VM port groups. In the above diagram two of the NICs in each host are reserved for VMK traffic and two for VM traffic.

So before I configure any further vSPhere extensibility, the lab looks like this;

As powerful as vSphere is, it’s capabilities can only be harnessed and the end user impressions will be governed by the tools provided to access it.

Working with vSphere 6 should be easy, all the bugs should have been worked out of the system by now.  Everything that could go wrong should be known about and the user interfaces should be rock solid.

My initial experience of working with the vSphere Web Client was anything but smooth.

First note is that my bundled browser needed flash, and that requires a download.  Not only a download but in order to work with flash on Windows Server 2012 that means installing the desktop experience.  If this was anything other than a lab environment these issues might well have to wait for approval at CAB to resolve.  Installing flash on a server and enabling features and services are not things that can be thoughtlessly done within controlled environments.

Once that is addressed next comes the client integration plugin.  this required further depreciation of security controls on the browser.  Again changes that may well require CAB approval and require management as an ongoing risk.

Those elements installed, it should just work? My experience with IE was no, it would work for some elements but when I attempted to install an OVF the plugin would fail.

In resolution I had to install further third party software in the form of firefox.  Which thus far has been robust.  I avoided chrome because of notifications that the plugin would not work with that browser.

Performance of the vSphere web client has not been lightning quick and this has again further slowed down deployment and configuration of the environment.  Some of that I can put down to the fact I’m running in a para-virtulisation state.  What is clear I think is that it still needs some work, hopefully 6.5 addresses that.

As a platform it seems very good.  Configuration of the resources has been intuitive. Assuming that the user has a fundamental understanding of how networking works and how to craft firewall rules then platform configuration shouldn’t be a problem.

Tags:Home-labRavelloVMware
previousVSphere 6 ESXi inside Ravello
nextDeploy an AD Domain in IaaS to Azure with ARM and DSC